The Buffalo Nations Luxton Museum is dedicated to the appreciation, interpretation, demonstration and display of the cultures, traditions, and values of the First Nations of North America and their trading partners. The museum seeks to show how the people of this land lived and adapted to their surroundings and each other prior to contact with European culture, and how they continued to adapt after European influences.

The Buffalo Nations Luxton Museum provides a link between the past and the present...demonstrating that aboriginal arts and culture is alive and flourishing today!

Norman Luxton was born November 2, 1876 at Upper Fort Garry at Red River (now Winnipeg, Manitoba). He was the second son of six children born to Sarah Jane and William Fisher Luxton. Norman’s father, a well-known Winnipeg pioneer, emigrated from Devonshire, England, arriving in Ontario as a young man. He initially taught school but later became involved with the newspaper business. In 1871 he was sent to Manitoba as a special correspondent for the Toronto Globe and in 1872, with partner John A. Kenny (a retired wealthy farmer), began The Manitoba Free Press (now known as the Winnipeg Free Press). The newspaper became famous for its advocacy of reform politics and liberal views, which appealed to the young sixteen-year old Norman, who worked for a short time at the paper. 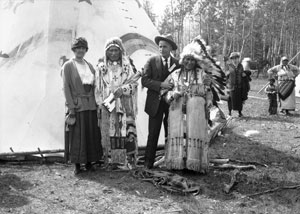 Norman developed an early fascination for nature and native culture, and after working for a short time at the Free Press, he joined the Indian Agency at Rat Portage (now, Kenora, Ontario), in 1892, as an apprentice clerk. He found the clerical duties to be rather uninteresting, but the expeditions up north for the purpose of making treaty payments to the various tribes, to be quite exciting. After working with the agency for a short time, in 1893, Norman decided to head to the Cariboo Gold Fields to make his fortune. It is hard to know if he did make it to the gold fields, but Norman did make it to Calgary and worked for the Calgary Herald for the next eight years. In 1901, Norman moved west to Vancouver where he briefly worked for a weekly gossip sheet called, Town Topics. While in Vancouver, Norman met Captain John Voss, an adventurous, eccentric old sea captain. The two determined and kindred spirits planned a most daring and prodigious voyage. They would purchase a 100-year old Nootka dugout canoe and sail it around the world. What followed was an adventure that embodied Norman’s energy and spirit, attracting international attention, and one that would literally change the course of Norman’s life.

Norman and Capt. Voss boarded their 30-foot red cedar log dugout, the “Tilikum”, and sailed from Victoria, B.C. on May 20th, 1901. They had rigged the vessel with a small cabin and storage areas for food and water. After months at sea and numerous violent storms, the Tilikum arrived in Tahiti, then Samoa, and onto Fiji, but it wasn’t the stormy waters that presented the only concerns. Continuous verbal confrontations between the two men and coral fever ended Norman’s adventure. Voss continued onto New Zealand, Australia and Cape Town, eventually arriving in London, England on September 2, 1904. Norman remained in Fiji, recuperating, eventually arriving back in Canada where he moved to Banff, Alberta in hopes of regaining his health.

Norman arrived in Banff at the age of 26, and it is where he remained for the next 60 years, until his death. At the time of his arrival, Banff was supporting a sizable tourist population and Norman realizing the interest Banff’s natural splendour held for visitors soon began tapping into this interest. He started many new business ventures, including the founding of Banff’s first all-season hotel, the King Edward. Two very notable businesses were the Crag and Canyon newspaper, which he published from 1902 to 1951, and the Sign of the Goat Curio Shop and Free Museum. Norman also developed the Banff Indian Days, an annual event that ran successfully for well over 70 years and eventually founded the Luxton Museum of the Plains Indian, a lifelong dream.

The Sign of the Goat was a combination Indian curio shop and taxidermy business and through this shop Norman was able to sell “Banff” to the visitor. Both the taxidermy specimens and the Indian curios were extremely popular with the visitors. Eventually the Sign of the Goat became a landmark in Banff and provided Banff’s tourist population with its souvenirs. It also helped to establish a strong relationship between Norman and the Stoney people. Norman provided rations and commissions for the local natives to produce crafts for his shops, assisted with food when needed, and acted on their behalf with the government when political issues arose. The Indians depended upon Norman for support and in return Norman depended upon them to make his businesses successful. Norman’s involvement with the Morley Trading Post, and the Stoney Indians of the Morley Reserve grew in strength after he met and married his future wife, Georgina McDougall.

Georgina McDougall was the daughter of the well-known trader and rancher David McDougall and Annie McKenzie McDougall of the Morley area. The McDougall’s were a well-established Alberta pioneer family, David McDougall being the second son of the Reverend George McDougall, Methodist missionary active in the Alberta region since the 1860′s. David McDougall was initially employed as a fur freighter for the Hudson’s Bay Company, however, in 1874, he and his wife decided to establish themselves at Morley as independent traders, opening a post to serve the Stoney Indians and support the Mission. The eldest daughter of Annie and David, Georgina was known as the “first white child born in Alberta.” Once settled in the Morley region, the McDougall trading enterprises flourished and when a young woman, daughter Georgina assisted in the management of her father’s Morley Trading Post.

The Luxton’s were prominent members of the Banff community and well respected. Norman was an active member of the Banff Chamber of Commerce holding substantial political influence. Georgina was always involved with the community hosting various charities and functions. Those who knew Norman, knew he pursued what he felt was important. He was considered to be the classic “Indian” man who traded with the Indians, amassed a large personal collection of native artifacts and helped to promote the traditions of the culture.

In the early 1950′s with the assistance from friend Eric Harvie, founder of the Glenbow Museum in Calgary, Norman began to realize his lifelong dream of building a native arts museum. He began his project by moving the old Banff Gun Club cabin to its present location and erecting the first of four rooms of the museum. By 1955, the second addition (larger than the first) was added, followed by the main structure in 1957. In 1960, the far-east room was finally completed. The collection of native curios and artifacts finally had a home. Sadly, thereafter, Norman Luxton, Banff’s most celebrated citizen, passed away on October 26th, 1962. But not before he was able to realize his dream and see it grow to fruition. It was known as the Luxton Museum of the Plains Indian at that time and although it has changed ownership since then and is now known as the Buffalo Nations Luxton Museum, the spirit Norman embodied for the museum still holds true today.

The Whyte Museum of the Canadian Rockies Archives and Library
www.whyte.org